Silt Fences: How Do They Work? 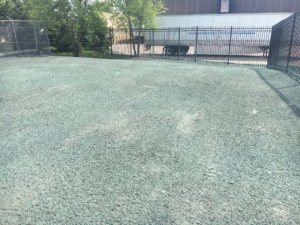 Construction sites typically use silt fence to define the perimeter or control erosion and water flow. Furthermore, it can be used as a slope control device, catching eroded material from another area. The silt fence acts as a filter to trap soil and sediments, while allowing water to pass more slowly.

What is Silt Fence?

Synthetic materials are used in most silt fences. Silt fence has a porous surface that allows water to flow through, but prevents as much as 80 percent of waterborne particles from escaping. The 50-foot and 100-foot rolls are available. The back sides of a silt fence are usually attached to stakes driven into the ground and tacked or stapled into place.

The purpose of a silt fence is to prevent erosion. Water flowing down the slope can be protected if it is placed at the top. Sod is usually placed on slopes to protect them from erosion until the grass takes root. Often, silt fences are used in clay soils with a high potential for erosion.

Silt fences can be loaded into wheelbarrows and trucks and distributed where they belong.

You can use silt fencing to control slopes or incline by installing more than one line of fencing. A closer silt fence allows less water to flow between the lines. The silt fence also traps any erosion that does occur, adding material to the slope, which builds it up. It is often used on large tracts of land with silt fences placed anywhere from 20 to 50 feet apart. However, those are not the only applications of this type.

Silt fencing protects surrounding wetlands and waterways from contamination during construction. Around the perimeter of the job site, partially buried fencing faces the construction area. By preventing spills from escaping the worksite, the eventual cleanup is simplified.

In addition, most construction sites have a lot of loose soil, and a silt fence helps retain the soil so that it can be used after construction is complete.

In addition to controlling the flow of water, silt fence can often be used as an erosion control measure. If you want to redirect a stream or move flowing water, this can be helpful. Water may escape through a silt fence as much as third of the time.

It is most environmentally friendly to deal with large piles of dirt or displaced sediment by installing silt fences. In addition to silt fence varieties offered by Clean Cut Outdoor, we also offer welded wire silt fences for jobs requiring greater security.

We install all types of silt fence at Clean Cut Outdoor. Regardless of the type, they are mechanically sliced, secured with 2*2 wood or steel posts, and fastened with an 8″ lathe to keep them protected from all weather conditions.

In general, sediment is kept on site by using silt fence as a perimeter control. Silt fences slow runoff, allowing water to flow through while filtering sediment and keeping it on site. Sit fences are made of geotextile fabric and are machine sliced or trenched into the ground 8 to 12 inches, leaving 2 feet of fabric above ground.

The trench has been filled and the soil compacted adjacent to the fabric. On the downstream side of waterflow, posts can be made from steel or wood. In the upper 6 inches of the fabric, three zip ties must be secured in 3 spots along the post’s length.

In addition to protecting the environment, silt fences can also be used to:

In addition to installing them around erodible areas, install them below disturbed areas as well.